As a 20th-century Victorian-style home, a Methodist Protestant church, a dance school and most recently as the Wrecking Bar architectural antiques store, the journey to bring you an ever-changing selection of specialty beers brewed on site and craft pub food has been defined by fond memories made by notable Atlanta families. On June 19, 2011, Bob and Kristine Sandage began a new legacy, as the basement of the charismatic Victor H. Kriegshaber House was christened as the Wrecking Bar Brewpub!

Vowing to boldly go where no other brewpub has gone before, the Sandages warmly open their doors, inviting the neighborhood to enjoy this artisanal gathering spot for the community that took the support of a community to build.

The new Havana Club location pays tribute to its forefather, but also offers amenities and an unparalleled design that guests are bound to remember. The venue boasts 15,000 square feet of warm, rich decadence and with three distinct rooms, each complete with its own unique ambiance. Let the smooth music of Stage, uplifting energy of Studio and creative ingenuity of Gallery carry you away on an exotic escape to Havana.

The Havana Club has been a fixture on the Buckhead nightlife scene since it’s opening in March of 1996. Founded by seasoned entrepreneurs, The Havana Club has garnered a steady following and remained an influence on Buckhead Ave. in Buckhead until it’s closing in late August 2007 for the Streets of Buckhead project. The revamped Havana Club reopened to the public in December 2009.

No white t-shirts, No tennis shoes, No flip-flops, No work boots, No athletic gear, No excessively baggy clothing, No baseball caps, No shorts, No Polos,

Read More
+ See and Be Seen at Twist

Prohibition is probably the closest Atlanta comes to the current style and substance of “speakeasies” in other big cities. Located below Stout Irish Pub in the funhouse labyrinth of Andrews Square, the atmosphere is clubby and classy. There’s oak paneling, a burnished honey-colored onyx bar top, a glowing hand-painted drop ceiling, and vintage ’20s decorations. Leather sofas and a fireplace create cozy seating nooks. But the bar is where the action is. Owner/ bartender Steve De Haan calls his cocktails “prescriptions,” offering them up with a steady stream of barkeep banter. De Haan compounds drinks with giddy precision, using historical recipes and old-school techniques, top-shelf liquors, fresh-squeezed juices and garnishes, while chipping ice off a 300-pound block. Smoking is not only permitted, but celebrated, with a house humidor room filled with fine cigars. A concise food menu includes snacks such as lamb lollipops. How do you find the secret number? That’s a really good question. But during a recent visit, several friendly bystanders were eager to share. Visit prohibitionatl.com for more information. Prohibtion is located at 56 East Andrews Drive in Andrews Square. 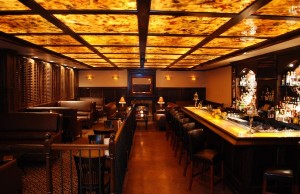 Throwing its proverbial hat in the gastro-pub scene ring is The Porter Beer Bar. The Porter boasts a beer menu of some 300 bottles and 30 more on-tap. In the kitchen, headed by Nick Rutherford (formerly of Seeger's, Quinones at Bacchanalia, and the Chocolate Bar), pub grub is served up with gourmet style. Try their legendary wings served three ways:  Chipotle BBQ, Traditional Buffalo and Teriyaki.

The Porter also has a "Hair of the Dog" brunch on weekends featuring peach-covered waffles, biscuits and  sausage gravy, and a smoked salmon scramble.

The Porter Bar is located in the heart of Little Five Points.

Read More
+ The Roof is on Fire at Andrews Upstairs

Quell your concert cravings at this venue that’s been host to class-acts like Avril Lavigne, Maroon 5, and Badfish. Local bands bring down the house every week. Another fun feature? The full bar boasts cocktails that will rock you.

Many bar patrons choose their favorite bar based on the people, drinks or their favorite bartender. Stats Atlanta is the place where you can find the best of all three. With five bars housed under one roof (well, one roof and an amazing skyline-filled rooftop), everyone can find the perfect spot for the weekday happy hour or to watch the game.

Fighting for the remote at home

to watch tonight's game? No worries, there are 70 televisions to catch the infamous touchdown or that game-winning three pointer here. While catching up on the latest scores from your favorite teams, try one of the Stats' American style tasting menu selections. With items like Crabcake BLT's, Tuna Takati Salad, and Old-Fashion Meatloaf, Stats takes your usual bar options to the next level.

Stats has an added bonus for sports fans. Atlanta's famed sports radio station, 790 The Zone, broadcasts live on game days from a private glass enclosed booth, which is a great opportunity to watch the pros at work.

Whether you're trying to catch last night playoff recaps or having an afternoon cocktail after work, Stats Atlanta is the place to be.

Your taste buds will be enticed at this bastion of flavor. Getting its name from the 56 types of wine it carries, the obvious focus is on the vino. The large selection comes at a reasonable price with $24 per bottle being the average. And if you just want a taste? Most varieties are just $6 a glass and $3 for half a glass. The restaurant serves tapas-style small plates like fried oysters and macaroni and cheese- all at a very reasonable three to five dollars per plate. There's quite a variety here for you to taste at Cellar 56, from wine to fine meals.

Head to Blind Willie’s for a real dose of the blues. Live music sets a riveting yet relaxed tone, and the blues memorabilia lining the walls is testament to the bar’s legendary status. Whether you’re dancing or enjoying the ambiance from a corner table with a beer, you can’t help but feel the soul of this vibrant venue.