The new Havana Club location pays tribute to its forefather, but also offers amenities and an unparalleled design that guests are bound to remember. The venue boasts 15,000 square feet of warm, rich decadence and with three distinct rooms, each complete with its own unique ambiance. Let the smooth music of Stage, uplifting energy of Studio and creative ingenuity of Gallery carry you away on an exotic escape to Havana.

The Havana Club has been a fixture on the Buckhead nightlife scene since it’s opening in March of 1996. Founded by seasoned entrepreneurs, The Havana Club has garnered a steady following and remained an influence on Buckhead Ave. in Buckhead until it’s closing in late August 2007 for the Streets of Buckhead project. The revamped Havana Club reopened to the public in December 2009.

No white t-shirts, No tennis shoes, No flip-flops, No work boots, No athletic gear, No excessively baggy clothing, No baseball caps, No shorts, No Polos, 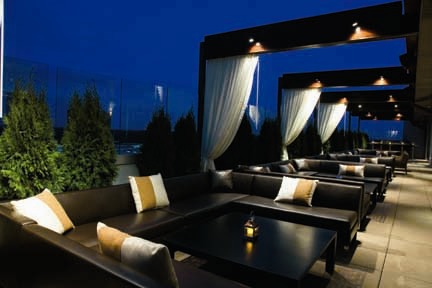 There’s no better place to feel like a rock star than Whiskey Blue. Of course the weekends are maddening but the weekdays aren’t too shabby either. Wednesday typically attracts the business crowd but there’s nothing boring about making dollars. As a hotel guest, it’s easy to access the rooftop party from within the hotel but it might be worth entering it from the street just to ride up in elevator with the couch and cross the bridge to excitement. The bar is a stylish slither so it’s only natural to meet people. Small bites like the yummy tuna spring rolls and lamb sausage pizza from Jean-Georges Vongerichten’s Market downstairs are available until 10pm. Move past the bar and the space opens up slightly. Wood-paneled walls and yacht-club inspired furnishings create a warm and intimate vibe and then, the DJ is barely noticeable all the way in the back. There’s also seating parallel to the bar, hence the slithering gap. Now if a city view and fresh air is a must, take the right just past the bar, through a glass door and behold a clear view of the city. To really soak in the al fresco vibe, though, go to the other side and stay awhile. Cabanas divided by a mini-garden of sorts, well shrubbery and other trappings of nature, work for all seasons thanks to heat lamps. Drinks are seasonal and pretty standard for most bars in the Gerber Group stable. The Bubblicious, made with bubblegum vodka, is super fun. Mojitos come in multiple flavors, including strawberry, blueberry, mangomint and ginger. And, there’s lots of whiskey too. It’s a nonstop party at Whiskey Blue. No wonder the beautiful people can’t leave it alone.

M BAR offers its guests the definitive Atlanta bar and lounge experience. From after work to after hours, the quintessential nightspot fuses the appeal of a high-energy bar and an ultra exclusive lounge. M BAR and FUSE LOUNGE are two boutique concepts sharing one intimate space. If a more intimate high-end experience is what you’re seeking, FUSE LOUNGE serves as a VIP getaway and provides an exclusive setting with first class service. Melding the character of the historic Castleberry Hill Arts District, M BAR dazzles even the most seasoned nightlife connoisseur. Its contemporary setting merge with signature cocktails, savory eats and Atlanta’s hottest DJ’s to create a sensational guest experience. M BAR sets itself apart from Atlanta’s traditional bars and lounges. Our VIP room, FUSE LOUNGE, is a boutique-sized getaway for intimate experiences and casual conversation. Featuring its own private bar and banquettes, guest can enjoy more discreet quaint interaction. By now we’re sure you’re wondering what the “M” in “M BAR” stands for. It’s our signature blend of Music, Martinis, Margaritas, Mojitos and Mimosas. M BAR is well equipped to fulfill any entertainment, social or cultural craving you may have. In addition to our ambiance and cocktails, any of our signature dishes will satisfy your palette. Featuring American classics mixed with modern favorites, the restaurant caters to guests seeking a casual meal or a social dining experience. Guests boast about our famous turkey sliders, 100% lump crab cakes and our most beloved Grandma’s Apple dessert. Your trip would definitely be in vein if you don’t cap off the night with at least one of Atlanta’s most sought after cocktails: Beso del Dia White Sangria, Super Head, Monkey Love Martini, or Cinnamon Toast Crunch Rum Punch, just to name a few. FUSE LOUNGE FUSE is the ultimate blend of intimate dining, cocktails and lounging. This boutique-style lounge, located in the rear of M BAR, is equipped to accommodate up to 80 people with 40 seated. FUSE was designed for the mature and crafted for the sexy. This space hosts a collage of design masterpieces; from our custom zebra wood walls to our walnut woodwork and floating granite bar. The feeling that radiates from this venue has been characterized as mature, romantic and mischievous, and customized for those teetering on the wild side. FUSE is the perfect venue for all occasions. Call to request a viewing with our events coordinator or join us for dinner and enjoy one or more of our delicious specialty cocktails. Ultimately, our impeccable service and attention to detail will undoubtedly make your experience a delicious memory, never to be forgotten.

Read More
+ Gold Room is New and On Fire

Before the law ended the good times at the Gold Club, the infamous strip club that scored national headlines, everybody who was anybody was there, and that’s exactly the vibe that the Gold Room resurrects. Still in the exact location that ironically boasted a church after its closing, there’s plenty of prayer-worthy, vintage inspired debauchery on the menu- sans strippers. Taking its current inspiration from New York and Las Vegas, the Gold Room, with its sexy, dark velvet décor, aims to deliver the ultimate “ultra lounge” experience, even allowing VIPs to look down on the action from the window-encased second floor. It boasts a one of a kind champagne bar and an expansive signature cocktail menu to cure the most luxurious of palates. And, for entertainment, it's not unusual to catch an aerialist with minimal golden clothing and dancers, outfitted in golden, vintage ensembles with flaming torches, on Saturday nights. Monday nights are hip-hop cool with producer/music exec Jermaine Dupri typically doing a stint in the DJ booth. LeBron James and Sean “Diddy” Combs have dipped in then but others like Lenny Kravitz, Fred Schneider of the B52s, The Black Eyed Peas's will.i.am and even Ms. “Tardy for the Party” herself, Kim Zolciak of Real Housewives of Atlanta fame, have popped in on other nights. This time around, everything that glitters is golden.

Who said going to the Opera was a bore? Opera Nightclub is one of the hottest places in Atlanta. With its elegant Greek columns, luminescent chandeliers, and three-tier balcony, you'll feel like royalty the moment you enter its doors.

Emerging onto the national scene as the backdrop to the Real Housewives of Atlanta's many dramas, it is also the place to go for VIP events Atlanta and to socialize with the beautiful crowd. Opera has been a staple in Atlanta for almost a century. Built in 1920 as a performing arts theater for the Atlanta Women's Club, the center has since undergone two million dollars worth of renovations to revitalize the space to its original luster. There are three amazing venues inside the nightclub: The Opera House encompasses a stage, perfect for VIP performances. In the Venetian room you can have party with 150 guests  in this Atlanta banquet hall, which includes grand Victorian accents. On those hoTLANTA days or cooLANTA nights, try the Patio, offering breathtaking views of the skyline. Want to get in on all the events? It's sometimes - keyword, sometimes- as easy as going online. Visitors may register online for its weekly events, reserve VIP tables and see photos from previous weeks. On Thursdays the music is dance, on Fridays its hip-hop & 80's dance mix, and on Saturdays come out with Atlanta's finest to see & be seen.
Next → Prev →