Read More
+ Delectable pasta made right before it hits your plate: A10 in Chicago!

A10 is a new restaurant located in the landmark Harper Theater, a shining example of the many vintage storefronts that color the exciting neighborhood of Hyde Park. Proprietor Matthias Merges explains, "Here, food and drink has been refined through generations to reveal a pure, delicious, and superbly crafted experience. Our menu represents our own modern additions to this ancient story, as well as our respect for the centuries of families, friends, and loved ones who brought these dishes to life.”

Eataly, Chicago features a 63,000-square-foot market including 23 unique eateries. There are 25 Eataly market places throughout the world: 13 in Japan, 10 in Italy and single locations in New York City, Dubai and Turkey. Chicago is the latest city to experience this Italian global phenomenon. Co-owned by Mario Batali and Joe Bastianich, this location is the largest in the United States and cost upwards of $20 million to complete. Check out this video to see what the buzz is all about. 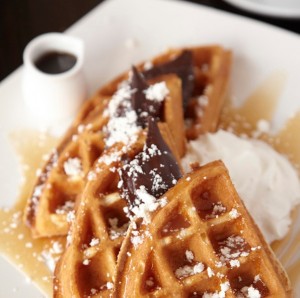 Kanela [kuh-nel-uh] is a marvelous world bringing a local, organic, and flavorful approach to a Greek-inflected American breakfast + lunch menu reflecting our heritage as well as the origin of the name, which means cinnamon in greek, and which you will find in abundance on the menu. A refreshing take on mama’s recipes and delivered to you just the same way, with love and a smile. Our deep earth tones, vintage chandeliers, exposed brick walls and wrap- around seating have created a dapper vibe for a snazzy, yet mellow breakfast + lunch. We use only the finest and freshest ingredients available in order to please our customers. Every kanela plate is carefully inspected to meet the highest standards and our quality expectations. We use Eggland’s Best Cage-Free Organic Eggs, Julius Meinl Coffee and support our local farms and markets. Our bars offer an elaborate menu of classic and signature cocktails made with fresh fruit and herbs. Every detail receives special attention.

Read More
+ The Purple Pig: a meatovers paradise! Cheese, wine and veggies too!

Calling all meat lovers...pull up a chair and get ready to pig-out at Chicago's The Purple Pig. Located on The Magnificent Mile, The Purple Pig is a collaboration of chefs Scott Harris, Tony Mantuano, Jimmy Bannos and Jimmy Bannos Jr. Featuring housemade charcuterie, cheeses and classic Mediterranean cuisine.

Read More
+ Picasso is Back at the Art Institute of Chicago!

A century ago, in 1913, the Art Institute of Chicago became the first art museum in the country to present the work of a young Spaniard who would become the preeminent artist of the 20th century, Pablo Picasso. This February the museum celebrates the special 100-year relationship between Picasso and Chicago by bringing together over 250 of the finest examples of the artist's paintings, sculpture, prints, drawings, and ceramics from private collections in the city, as well as from the museum's collection, for the first large-scale Picasso exhibition organized by the museum in almost 30 years. The show runs from February 20, 2013 through May 12, 2013. The exhibit shows such diverse and significant works from the museum's own exceptional holdings and from collections throughout the city, Picasso and Chicago not only charts the full gamut of Picasso's artistic career but also chronicles the growth of Chicago as a place for modern art and the storied moments of overlap that have contributed to the vibrant interest in Picasso from 1913 to today. Visit artic.edu for more information.he Art Institute is celebrating a 100 year relationship with the artist by bringing together over 250 of Picasso's finest works of Art.
View Larger Map

We bring you Men and Women's designer clothing in a full range of sizes (not just 0's and 2's). We're known for our personal service and our great deals. Up to 90% off retail!

New York and LA have been doing pop-up sample stores for years. Now it's Chicago's turn.

An independent boutique nestled in the heart of Chicago’s Gold Coast, Sofia brings to you an eclectic, hand-picked collection of clothing, shoes and accessories. Dedicated to showcasing collections from emerging fresh talent as well as the best vintage pieces from established designers, Sofia has quickly become a true gem in Chicago’s fashion market. Named after the impeccable and unforgettable actress, Sophia Loren, Sofia embodies the universal style icon’s qualities – beauty, class and glamour. Sofia encourages their customers to “live lovely” by embracing the beauty of who they are and taking chances in both life and fashion.

After a long week of wise cracks and improvised jokes, Second City star Lauren Ash hits up the sinfully delicious brunch at Bongo Room. Lauren's must-have is the Nestle Crunch Pancakes, with bananas and crumbled Nestle Crunch bars baked into the pancake. If that sounds decadent, take a look at the rest of the menu. The Chocolate Tower French Toast is a favorite, with chocolate French Toasts piled high and topped with bananas and both chocolate and white chocolate shavings. For those who want to stay away from the carbs- although this is the place to divulge- Bongo Room has a phenomenal Lump Crab Egg Benedict that's cooked to perfection, and a lunch menu filled with American favorites like BLT's and classic salads, but all served in over-the-top portions. Bongo Room proves that not everything is bigger in Texas, because brunch is massive at Bongo Room. *** Lauren Ash is a Canadian-born comedian and actor at Chicago's iconic Second City comedy club. Lauren has received rave reviews for her starring role in Second City's Taming of the Flu.

Ever wonder where women like her go to hang out in Chicago? Let her tell you. Ashley Bond is a personal trainer, Chicago Luvabull, Miss Illinois USA 2009, Actress and Bulls TV host.

Let Billy Dec, the nightlife Guru himself, tell you what you need to know about Chicago. Billy Dec is the CEO and Founder of Rockit Ranch Productions, Chicago’s premier restaurant and entertainment development company. The company owns the new hotspot Sunda, The Underground club, and the award-winning Rockit Bar & Grill.

When she's not running the show at one of the nation's largest contemporary art museums, Museum of Contemporary Art Director Madeleine Grynsztejn can be seen at Lincoln Park. This area, which is also one of the coolest Chicago neighborhoods of which she is also a resident, is Madeleine's go-to place for some R & R. "I really like to go there and unwind and walk around the lake and take a look at the city from there," Madeleine told citybuzz. Apart from spectacular skyline views, the park boasts an impressive resume of

renowned artists and architects that have made the it one of Chicago's most treasured places, like sculptor Augustus-Saint Gaudens, landscape designers Ossian Cole Simonds and Alfred Caldwell, and architects Joseph Lyman Silsbee and Dwight H. Perkins. You don't need to be a director of an art museum to appreciate the beauty of their work. A trip to this peaceful, shoreline park would not be complete without visiting the zoo. "I love the Lincoln Park Zoo," Madeleine said, and millions of visitors each year agree. The free, family oriented experience is absolutely breathtaking in both the beautiful animals (lions to swans) and incredible layout. A getaway to Chicago would not be complete without a trip to the breathtaking Lincoln Park and uber-hip neighborhood. *** Madeleine Grynsztejn is the Pritzker Director of the Museum of Contemporary Art and is also a resident of the Lincoln Park neighborhood in Chicago.

Even though restaurateur Billy Dec's Rockit Bar & Grill may make the best burger in town, it doesn't mean he doesn't have cravings for some good, hearty Italian foo

d. Whenever he's in need of some pasta and marinara sauce, the Chicago social mover always heads to La Scarola. The Italian restaurant is known for its low key environment that brings high-profile diners like Billy. It's been awarded the Zagat Excellent Rating year after year for their gigantic proportions and delicious cannolis. La Scarola's dishes taste like the ones from the Italian grandmother you never had. Sure, Billy Dec is well-known about town, but La Scarola's great because regardless of your residence, you'll feel like a local. The place is small so everyone knows each other, and if they don't, you'll feel like they do after the meal is over. With a crackling fireplace and the likes of Billie Holiday setting the mood, it's impossible not to relax and enjoy a great dinner at La Scarola. *** Billy Dec is the CEO and Founder of Rockit Ranch Productions, Chicago's premier restaurant and entertainment development company. The company owns the new hotspot Sunda, The Underground club, and the award-winning Rockit Bar & Grill.

Read More
+ Rick Bayless Loves to Walk Under the Picasso

Frontera Grill's Rick Bayless is a big fan of Chicago's outdoor areas, but there's something special about Daley Plaza that never gets old for him.  Daley Plaza is a great place to go year-rou 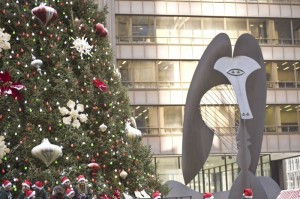 nd, with events happening every season. From Halloween activities to the great Christmas tree to ethnic festivities to remembrance ceremonies for Memorial Day, there is always a reason to visit the area. Even when there's not an event going on, Rick Bayless told citybuzz he likes to head over to Daley Plaza due to a certain Spanish artist:

One of the places that I’ve never tired of walking through, and we have some really beautiful ones in Chicago, is the area right around Daley Plaza because we have that incredible Picasso sculpture... It’s really fun because they are enormous sculptures and they almost invite you to be part of it, to climb around in them, to interact with the sculpture in a way that I think the artist really want you to do. They are not something that’s sort of often and distant, but something that invite you into them.

Rick Bayless loves the sculpture in Daley Plaza, but we're sure he also loves the Chicago farmer's market that calls the plaza home from May through October. ***Rick Bayless is an award-winning chef-restaurateur, cookbook author, and television personality. Known for his Mexican cuisine, Bayless has become hugely successful with restaurants like Chicago's Frontera Grill and America's only fine-dining Mexican restaurant, Topolobompo.
Next → Prev →