Read More
+ Appreciate the arts at the Dallas Arts District

After a recent rejuvenation (or rather, a recent overhaul), the Dallas Arts District has transitioned from simply a downtown neighborhood to a destination in and of itself. The district is on the north side of downtown and encompasses Dallas' premier art museums and performance halls that are all connected by a lovely outdoor urban space. It's also a great areato view some of the city's bestarchitecture, like the Meyerson and the Wyly Theater. The Dallas Museum of Art, Nasher Sculpture Center, the Crow Collection of Asian Art, the Winspear Opera House and the Dallas Arts Magnet also call the Dallas Arts District home. 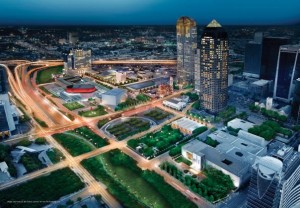 The Dee and Charles Wyly Theatre is part of the AT&T Performing Arts Center located in the Arts District of Downtown Dallas. The theater was built so that their main performance hall is surrounded by three glass walls, creating a unique experience for the audience. The architecture of the building (designed by REX/OMA) in conjunction with an extensive pulley system creates a stage space that provides a lot of freedom for directors to work with many quickly changing sets. It's like a playground for contemporary theater. The building is a work of art in and of itself with the 12-story building standing seemingly suspended three stories up with only one supporting wall. Check with the Dallas Theater Center for performances and showtimes. 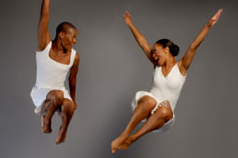 new works from New York based choreographer and Broadway based Lion King performer, Ray Mercer.  Now located in the up and coming Dallas Arts District, performances can been enjoyed at the Dee and Charles Wyly Theatre in the Dallas Center for the Performing Arts. When contemplating exploring the arts, the Dallas Black Dance Theatre provides not only consistently fresh entertainment, but offers classes (three levels each) in ballet, jazz, tap and Liturgical disciplines for ages 4 and up. Nearly 400 students per week enjoy learning in the year-round classes and develop a new appreciation for what they see up on stage. With general admission tickets at $15,  it's more than worth your while to check out a performance or learn one for your own personal repertoire.

If you love theater, dance, and the thrill of the arts on a live stage, the Music Hall at Fair Park is the place to be. Favorites like Phantom of the Opera and new hits Legally Blonde: The Musical are just two examples of big n

ame shows that recently called the Music Hall their home. The ability to house a full scale orchestra and opera makes it possible to watch Miss Saigon and Les Miserables without missing a moment of the action or impeccable sound. Even the popular TV show, “America’s Got Talent” chose the Music Hall at Fair Park for its live taping for broadcast. Besides being a hub for culture, the Music Hall provides ample space and service for black tie affairs, luncheons and banquets. Easily accessible to both north and south Dallas, this is one venue to explore, enjoy and be fully entertained.

An affordable evening of culture and class? You bet. The Winspear Opera House is the crown jewel of One Arts Plaza, boasting seating for 2,200 with retractable screens, variable acoustics and a spectacular view of the skyscrapers of downtown Dallas. 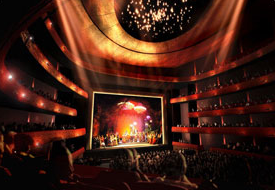 Enjoy your own Phantom of the Opera moment as the enormous chandelier appears to float above the room until the lights dim for the show, and then slowly ascends into the ceiling and disappears. Speaking of grand performances, take in family friendly Broadway shows like Beauty and the Beast, the legendary Pointer Sisters, or more mature favorites like Avenue Q. The acoustics rival Broadway theaters and bring the orchestra to life in an intimate way, no matter where your seats are located. During intermission, browse the lobby area and coffee bar for the delicious treats and fine drinks. Tickets begin at $25, providing affordable date nights, family outings and group excursions. And remember, the good times aren't over until the fat lady sings.

Looking for something entertaining and low-key with a side of wine? Check out the Angelika Film Center at Mockingbird Station. Whether you're trying to impress a date or a client, this place has it all.

One of the most stylish and beloved theaters in Dallas (voted Best Movie Theater by the Dallas Observer), the Angelika combines old world charm with new world hip and features some very under-the-radar Oscar-worthy films. During the spring this place packs a hearty crowd of celebrities and movie critics for the annual USA Film Festival; however, look over your shoulder on any given day and you'd be surprised who might be sitting behind you. Majestically overlooking the whole of Mockingbird Station, the Angelika is easily accessible by car, cab, or train and provides an abundance of shops, like Movida Boutique, and restaurants, such as a local Dallas favorite Trinity Hall.  But don't overlook the Angelika Cafe where you can order standard movie fare such as popcorn and a soda, or get into the mood with wine and chocolate.

Places like Hollywood and New York are known for their legendary theater houses, but with the Majestic Theatre, Dallas has a goldmine of entertainment theatre that lives up to its grand name. On April 11, 1921, the Majestic Theatre opened its doors during the Vaudeville era, hosting a variety of now legendary acts from Houdini to Mae West and Bob Hope.  As Vaudeville began to fade and the era of "talking pictures" emerged, the Majestic Theatre began hosting movie premieres. And not to be outdone with its past, the Majestic hosted stars such as Jimmy Stewart, Gregory Peck and John Wayne.  The Big Bands featuring Cab Calloway and Duke Ellington continued the tradition of live entertainment at the Majestic. In 1973 the Majestic Theatre went dark after the final showing of the film, Live and Let Die, but when it re-opened in 1983, it was upgraded to the elite list on the National Register of Historic Places. Today the Majestic Theatre serves as a beautiful old-era theatre house, with extravagantly engraved and decorated balconies, plush red seats, and grand box seats, and is home to performing acts as diverse as Menopause the Musical to Dallas Black Theatre performances to Moscow Ballet's Great Russian Nutcracker.
Next → Prev →