The Bazaar also features vitrines curated by Murray Moss of Manhattan's (and West Hollywood's) hyper-design shop Moss, and if you see something you've just got to have -- a fabulously expensive Nymphemburg porcelain tchotchke, a gilded piglet piggy bank, a vintage model powerboat, a fetching pair of gentleman's shoes or, my favorite, a set of finger puppets depicting five or six notables (including Maharishi Mahesh Yogi) -- why, by all means break out that platinum credit card. The rest of us will just goggle.

The Bazaar has some of the same theatricality, but it's more accessible. And more fun. I don't think I've ever been to a serious restaurant (serious in the sense that each dish is a revelation) that was as engaging and playful. Yet each dish has a kind of laser precision, especially the more contemporary ones from the Blanca side of the menu.

Osteria la Buca is located on Melrose Ave, two blocks East of Paramount Studios on the outskirts of Hollywood. We celebrate the gift that is Southern California produce and grass roots Italian cooking. We have a focused list of Italian and California wines and offer a full bar specializing in boutique spirits from around the world. We represent handmade, whole beast, long braise, and farm fresh traditions. We welcome all to gather around our tables.

The menu is mostly small plates, but instead of an annoying sprawl of platters that don't fit on the table, the delicious spreads and dips are presented in small bowls. Who wouldn't swoon over the slurry of piquillo peppers with feta or the thick Lebanese yogurt with olive oil, lemon and dried oregano? They're wonderful spread on warm, freshly baked flatbread. The menu is fresh and appealing, the flavors big and rustic. I love the artichoke leaves, charred at the edges from cooking in the wood-burning oven. Cauliflower florets come perfumed with vaudovan (a French curry powder) and dotted with cashew nuts. And instead of the ubiquitous pizza, Cleo is serving Mediterranean flatbreads.

Read More
+ Surf’s Up at Duke’s

If you can’t make it to Maui this weekend, your next best bet is to head over to Duke’s. Located in Malibu and overlooking the ocean, Duke’s is the perfect dinner destination that brings Hawaiian flare without all the tourists. Locals from Malibu and Los Angeles can never seem to get enough of the fruity cocktails and signature fish tacos that Duke’s serves up for lunch and dinner. If you stick around for dinner to enjoy their fresh fish selections such as their lobster tail, make sure to grab a table near the window to enjoy ocean views and the sunset. Though they are known for their fish tacos and array of assorted seafood, diners rave over their macadamia nut ice cream and kimo wine as well. Duke’s also has designated nights for wine lovers and fruity cocktail aficionados. Wednesdays are dedicated to bottles of half-off wine while the Barefoot Bar assigns different nights to different drinks. If you are visiting the bu’, make sure to visit Duke’s. .

Skip the 16 hour flight, because Malibu’s got the beach and Taverna Tony is the perfect Greek escape. Complete with host Tony, this home-style experience feels like a pampered invite into a hillside Mykonian kitc

hen. Taverna Tony is the local secret loved by celebs, including Sienna Miller, Jessica Alba, Jerry Bruckheimer and Salma Hayek. It's located in the trendy Malibu Country Mart where high-end shopping and dining are a common beach detour. If feeling romantic sit outside on the exotic garden patio, or for a little more spice enjoy the live music and belly dancer inside. The perfect stop for a post beach party, bring friends because portions are plentiful and the menu needs lots of sampling. For a pair of dips, Taramosalata is a wonderful salty compliment to the earthy eggplant Melintzanosalata. Spanakopita or Tiropita are musts, because everyone loves a little fluffy filo. And Moussaka enthusiasts, this one is not to be missed.

Decadestwo co-owner Christos Garkinos, who is the self-proclaimed "Robin Hood of Fashion," has access to some of Hollywood's best closets, like Charlize Theron, Rachel Zoe and Selma Blair. When he's not shmoozing with the rich and fabulous and filling his store with high-end consignment items at killer prices, Christos is at Tere's Mexican Grill. "It's the best Mexican food in the city," Christos

told citybuzz. At Melrose and Cahuenga, this popular and humble Mexican joint is just steps from his home, which as he explains is "a huge LA bonus." The easy-to-miss restaurant may have tennis ball-footed chairs and orders are only taken at the bar, but who needs pizazz when the food does all the talking? Delicious handmade tortillas wrap the overflowing burritos and tasty enchiladas. A favorite meal is the Carne Asada Nachos that's washed down with a fresh, traditional Horchata drink. The sunny, earthy interior as well as sidewalk seating make this a perfect spot to enjoy the LA sunshine, while chowing down on some of the best Mexican food North of the Border. *** Christos Garkinos is the co-owner of the popular LA consignment boutique, Decadestwo, that has been featured on Bravo's The Rachel Zoe Project. Decadestwo has high-end designer clothing, shoes and accessories from some of Hollywood's most fashionable closets. Christos is also owner of LA's Alpha, an all-encompassing men's store, which GQ named as one of the top 100 men's stores in the country.

Read More
+ Nothing to Toi About 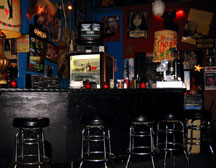 Even though there are countless Thai restaurants spread all over Los Angeles, nothing compares to Toi on Sunset. Half Rock ‘n Roll café and half amazing food, this place is the ultimate stop for great veggie Thai food with even better service. Some must haves include their amazing Pad Thai and even more amazing vegetarian dishes such as the dried chili cashews and the eggplant, pumpkin and tofu. Other than the food, what makes this place so great is the atmosphere; the décor is wild and the walls are filled with rock royalty paraphernalia and posters galore. While you may find other restaurants shutting their doors earlier than eleven, this place shuts down at 4am, making this a great after hours spot for drinks and dining. And don’t worry about what days this place is open; they are open seven days a week until 4am each night! With fabulous food and a killer vibe, the only downfall would be the horrendous parking situation on the weekends; try to find a spot on Sunset or take the time to search for parking, because after all, it is open until 4am.

When their saying is “Home of the doner kebab,” you know they must be doing something right. Thanks to two college students that dreamed of distributing the classic and fresh food to the streets of Los Angeles, Spitz became a getaway for those craving the Spanish food but couldn’t seem to get away to Madrid in time to get it. With two locations offering dishes such as “The Chicken Doner” where you are encouraged to pick a bread, style and sauce to accompany the chicken and other vegetables offered with the dish, people seem to be craving kebab more than ever. Along with the classic doner meals, Spitz offers wraps and salads for those craving the kebab with fewer calories. Though the food is definitely all the rage at Spitz, the clever college men included a full bar and even a happy hour full of hummus strips and sangria to bring back an element of college life. Though spit comes from the device in which the meat is cooked vertically, patrons and kebab lovers do anything but spit out anything Spitz is serving.
Next → Prev →