Omar’s La Ranita is a neighborhood eatery in Greenwich Village, NY, tucked away in a historic brownstone on West 9th Street. This legendary downtown Manhattan address was host to some of the most memorable nightlife landmarks of the last 50 years. La Ranita serves seasonal American cuisine inspired by superb produce found in local green markets.

OBAO bridges the gap from the streets of South East Asia to the Streets of NYC, bringing you combinations of various Thai and Vietnamese foods with a twist. This Citybuzz pick takes traditional dishes from Thailand and Vietnam like Pad Thai and Pho Noodles and adds a touch of luxury and elegance without ever compromising on authenticity.

The Cellar – what a discovery! I passed by the Beecher's Handmade Cheese store in Flatiron District many times, however it took me long time to discover the true gem they were hiding: the little wine bar/ restaurant. In the store, visitors can witness the old art of making cheese and buy the products. However, they also have the opportunity to enjoy a glass of wine with the delicious cheeses in their very romantic cellar downstairs. The Cellar serves a wide variety of wines, cheeses, meats and charcuterie in a quite unique environment. The candles, the small wooden tables, and the lack of windows make this little venue the perfect place for a date. 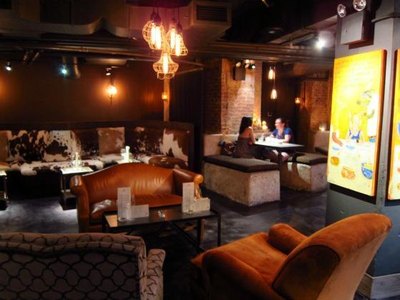 The Frankies Spution restaurants – one in Brooklyn and the other one on 17 Clinton Street, no longer need an introduction. They are already well known by many of the Italian cuisine lovers. Fortunately for New Yorkers, Frankies opened a new location in the West Village on 570 Hudson Street. Just like the other two locations, the new venue looks beautiful and welcoming, with a comfortable dinning space, a spacious bar area, and Italian food at its best. Most of their dishes are seasonally-inspired, prepare with simple ingredients but great attention. Nothing looks too pretentious; however, everything is absolutely delicious. Simple but heavenly – that’s how I would describe their food in two words. Any day of the week expect this place to be packed, because who doesn’t love Italian food in such a pleasant environment? 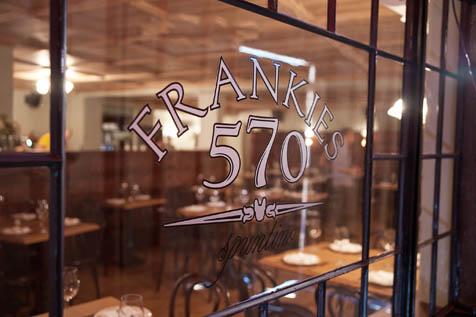 The Waverly Inn is a classic. If you manage to play your best cards, and get a table, you will feel part of an exclusive dinning club. No matter when you go, you will most likely be sited next to a celebrity, best-selling author or top-model. The décor is beautiful, cozy, with a lot of wood, chandeliers, fireplace, and paintings which create the atmosphere of a townhouse inhabited by English aristocrats. The food is outstanding, and the service is great. They also promise to use “local and organic” ingredients, whenever it is possible. Many consider The Waverly Inn pricey; however, for such a selective dining experience, it is certainly worth it. 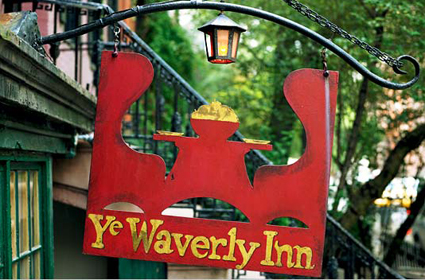 Veselka offers probably the best and most authentic Easter European food in New York, anytime of the day. Given their long operating hours, Veselka is great for breakfast, brunch, and late night snacks. Everybody loves Veselka for some obvious reasons: it is cheap, it is fast, it is non-pretentious, and it is absolutely delicious. I believe every New Yorker ends one day at Veselka. It can be for a very early omelet or for some pierogies at 3am. The vibe is great, and the crowd always surprising. So, do not be surprised if you get sited at breakfast next to a group of hip kids dressed as if they just stepped out of the club - because they did. 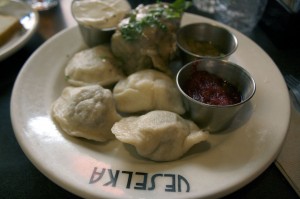 Extra Virgin is no longer a secret for the residents of the West Village. In fact, it is one of the most popular brunch places in Manhattan. Extra Virgin feels very low key, with its exposed brick walls, wooden tables, and friendly staff, however the food is just as good as in any up-scale restaurant. They change their menu frequently, and they always offer

inventive Mediterranean dishes. I simply love their roasted chicken and the delicious artichokes Provençal. The place is always crowded, but if you are lucky to get a table outside, you will get a good feeling of the life in the popular West Village. The restaurant is on the corner of West 4th street and Perry street, one of the most charming blocks in New York City. 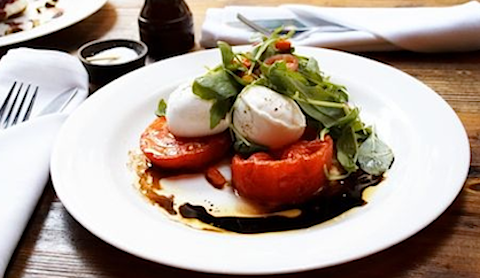 If you ask real New Yorkers where to go for the best Mediterranean food, they will probably send you to Taboon restaurant in Hell’s Kitchen. If you ask them where to go for the best Middle Eastern cuisine they will most likely send you to Taboon also. They prepare most of their exotic specialties in a wood fired oven by blending in Mediterranean flavors with the Middle Eastern cuisine. In fact, “Taboon” in the Arabic word for oven. Every dish is splendid, and comes in a beautiful presentation, staring with an appetizer of falafel. Their lamb kebabs are huge, and they taste just as good as those I had on the streets of Israel. But let’s not forget to mention the décor of Taboon: authentic, authentic, authentic. Therefore, Taboon offers a complete, unforgettable Middle Easter experience in the heart of Manhattan.

This charming Italian venue, called Bocca di Bacco, manages to stand even in the competitive restaurant scene of Hell’s Kitchen. Even though they call themselves a wine bar, explained by the generous selection of 40 wines by the glass and around 500 by the bottle, I personally consider Bocca di Bocca a fabulous restaurant, with an amazing Northern Italian cuisine. The space is stunning.  Mostly made of wood, with brick walls, and dimmed light, this is one of Hell’s Kitchen's most romantic spots. If you pass by Eights avenue and 54th street, you are probably not going to miss it. Their majestic wooden door made me walk in Bocca di Bacco for the first time. 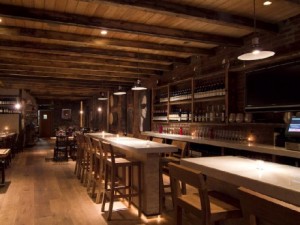 I would like to introduce you all to this new Soho gem: The Dutch restaurant. Located in the old Cub Room space on Sullivan and Prince, Dutch is charming, welcoming, and their dishes are fabulous. The fairly large restaurant is decorated with giant globe lights, vintage mirrors, wood, and an unique eight-stool oyster bar. The best part is the back room with a working fireplace, and a private dinning room in the basement (reservation are required). On the Dutch’s generous menu you will find seasonal green market salads, good steaks, delicious sandwiches, a great fried chicken, seafood, and amazing pies. The Dutch is great for dinner, but lunch and late nights also. 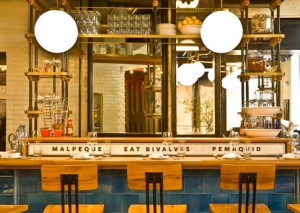 Read More
+ Rubirosa – for a memorable slice of pizza

Unless you are in Italy, it is not easy to find a venue where you can have a perfect slice of pizza, in an welcoming environment. Fortunately for New Yorkers, there is Rubirosa , located on Mulberry between Prince and Spring Street. This little Italian restaurant is one of the coziest venues I know, and their pizza is one of the best I ate in New York so far. But don't get distracted by the pizza only, because most of their dishes are simply delicious. And caution - no matter what you order from their menu, it is going to come in a large quantity. Being lunch or dinner time, Rubirosa is always crowded, and their staff always friendly. The gorgeous wooden bar, the wooden floors, and dimmed lights make the place look rustic and warm, reminding of a nineteen century farm in Italy's countryside. But what makes Rubirosa truly memorable is certainly the foo 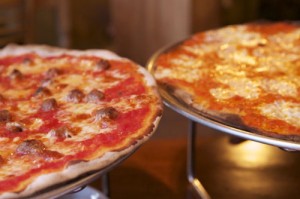 Read More
+ I have high standards, and I take them to Nobu for dinner 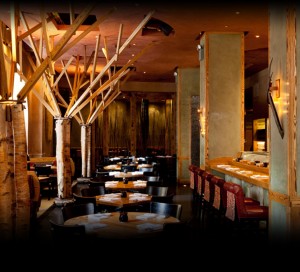 Given that I lived in Japan for a long time, I have high standards when it comes to my sushi dinners. However, Nobu probably rises above everyone's standards. Smaller than the gigantic, and glamourous location midtown, Nobu Next Door can be considered an up-scale neighborhood venue, mostly populated by Tribeca's residents. The chef delivers authentic Japanese cuisine, with a touch of modernity. Try the black cod, rock shrimp with spicy mayonnaise, tuna tartare, and any of the sushi rolls. Decorated with natural textures, such as trees, wood, and river stones, the space looks cozy, organic, but modern and sophisticated in the same time.

Read More
+ Embark on a tasty experience at Lure Fishbar 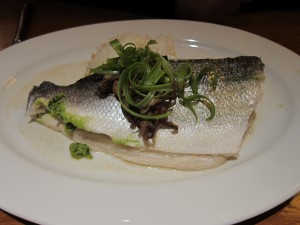 If you love fish, I encourage you to go on board of Lure Fishbar. The inside of this spacious Soho restaurant, looks like a huge yacht, with classy passengers, and a very friendly staff. The fish is outstanding, and the deserts are 'dangerously' good. In fact, anything you order in Lure is simply delicious. And if you are not ready to leave Lure after dinner, try a glass of wine at their magnificent bar. Therefore, Lure seems to have it all. The location, the atmosphere, the great food, and the large space, make this restaurant a perfect spot to bring your group of friends, your family, or a date on a Friday night.

A 4 star restaurant that has been named the #1 restaurant in New York by New York Magazine, New York Times and Zagat’s Guide; has won more James Beard Awards than any other restaurant; and has been awarded the highest number of Michelin stars: 3, Le Bernardin is the premier French restaurants in New York City – and arguably the world – and certainly one of the most elegant dining rooms in the country.

The philosophy of Le Bernardin is, very simply put, the fish is the star of the plate. With the focus on seafood, Chef Eric Ripert (whose name and restaurant may sound familiar from multiple Top Chef appearances) has created an ambitious yet uncomplicated dinner menu that is broken into three courses: almost raw, barely touched and lightly cooked. Chef Eric Ripert’s favorite dishes are the Tuna made of Layers of Thinly Pounded Yellowfin with Foie Gras and Toasted Baguette; the Crab with Stuffed Zucchini Flower with Peektoe, King Crab and “Fine Herbs – Lemon” Mousseline Sauce; and the Surf and Turf of Escolar and Seared Kobe Beef with Sea Bean Salad and Eggplant Fries. Le Bernardin is one of those restaurants that is the special occasion as it will probably be the most memorable dining experience of your entire life. Insider's Tip: As Le Bernardin's reputation precedes itself throughout the globe, make sure to make a reservation well in advance and bring a heavy wallet; such perfection is priced accordingly.
Next → Prev →