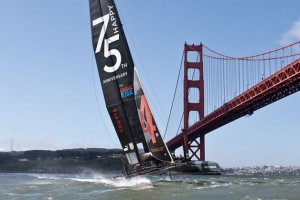 The 34th AMERICA’S CUP will be contested in San Francisco Bay this summer! The America's Cup is oldest trophy in international sport, first contested in 1851. The 34th America's Cup is an umbrella term that covers several events: the 2013 America’s Cup Finals, the Louis Vuitton Cup, the America's Cup Challenger Series, the America’s Cup World Series and the Red Bull Youth America's Cup. The 2013 America’s Cup Final is scheduled Sept. 7-21, 2013, in San Francisco. The final, also known as the Match, will feature the defender, ORACLE TEAM USA, against a challenger that will have won the Louis Vuitton Cup which goes to the winner of the America’s Cup Challenger Series. The Louis Vuitton Cup series to determint the challenger, begins on July 4, 2013 and runs until August 30. The America’s Cup is the most difficult trophy in sport to win. In the more than 150 years since that first race off England, only four nations have won the coveted trophy. Throughout its history the America’s Cup has attracted the tycoons of business and industry, flamboyant, outspoken and demanding characters who are often successful in their career, but rarely successful in the America’s Cup. They’re attracted to the Cup because of the demands required to win the trophy, but only four nations have hosted the trophy: the U.S., Australia, New Zealand and Switzerland. Come see sports history in San Francisco this summer! Visit americascup.com for more information.

Everyone's talking about the museum on the west coast that makes all other children's museums green with envy. Located at the foot of the Golden Gate Bridge, The Bay Area Discovery Museum is the only museum in a National Park and its creative exhibits are admired by other museums nationwide. Whether it's sculpting a model of the Golden Gate Bridge (that's right above!), examining live sea creatures in a recreated natural habitat, or watching a puppet show, the hands-on museum nurtures future generations of creative thinkers and innovators.

There are tons of exhibits at the Bay Area Discovery Museum year-round for children to discover and get creative in their own way.