If the hustle and the bustle of Chinatown's to-go only dim sum spots makes you feel "lost in translation," but you still have a taste for the Orient, Yank Sing might be just the thing. One of only five restaurants designated "an American classic" with a 2009 James Beard Foundation award — the Oscars of the culinary world — this delightful dining spot is the definitive dim sum house. With unflinching, rapid-fire servings of an exceptional variety of fried and steamed small plates wheeled around in carefully choreographed carts, your only worry will be to know when to stop. Luckily, you can get comfortable sitting back to overeat and taste your terrific tea at a luxe table dressed in white linens — a far cry from the flickering overhead lights and suspended poultry of Stockton Street. Better yet, with prime locations in both the Embarcadero and the Financial District, your hotel suite or business meeting may be just a hobble, skip or jump away.

Read More
+ House: Not Your Average Hole in the Wall

Fail to pay attention and you’ll walk right by, but for those who know House it stands out like the TransAmerica building amidst the cliché dim sum depots that define Chinatown.  For over a decade, House has finely presented the best in East-meets-West cuisine for its loyal patrons. 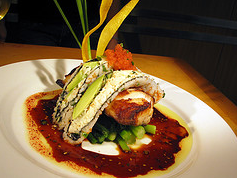 Always dramatic, Chef Larry Tse’s perfectly balanced towers of food are known to awe.  Set against a sleek neutral atmosphere with slate tiles and simply framed art, his presentations really stand out.  Don’t expect dumplings in a bamboo steamer, they’ll come out arranged around a delicate sauce on a paper-thin layer of beets, and it’s as pleasing to look at as it is to eat. Of course, every restaurant has its signature.  For House, the miso-glazed black sea bass ($24) has a long-standing following; it’s a caramelized slab of perfect white fish draped with a long-biased cut of California roll.  House also performs every operation with military efficiency and precision so you can get in, get out, and enjoy your evening on the town.

Read More
+ Sushi Gets Jazzed Up at Yoshi’s

Someone forgot to tell the proprietors of Yoshi’s that sushi and jazz are cultural opposites.  Of course its founder and namesake, Yoshie Akiba, is also a fascinating mix. 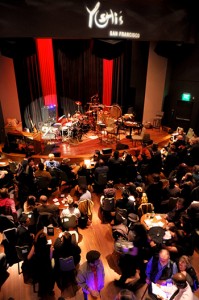 Orphaned in Japan during WWII, Yoshie came to Berkeley as a student and opened Yoshi’s with her two best friends. Thirty years later, in its new $10 million setting in the Fillmore District (the “Harlem of the West”), Yoshi’s has earned a reputation as one of the world’s finest jazz venues featuring jazz legends like Dizzy Gillespie, Diana Krall, Max Roach, and Harry Connick Jr. Yoshi’s is also an award-winning restaurant, with Chef Shotaro Kamio presenting modern sushi that he describes as “seasonal, simple, surprise."  You can make dinner reservations in the separate restaurant before the show or enjoy small tapas-style sushi and sake cocktails in the club.  Prices are higher than average, but you’ll appreciate that Yoshi’s serves fresh and thoughtful Japanese cuisine rather than greasy quesadillas and mozzarella sticks. Tickets range from $13 - $100 depending on the performer, and the club seats 420 in its warmly lit acoustic cavern.  The custom sound system, complete with a resident Steinway grand piano, is clear and allows artists to truly be the center of attention.  So feel free to jazz it up with flapper outfits and tailcoats.

Read More
+ Do You Know the Cha Cha Cha?

Away from the bright tourist lights of North Beach and Union Square, most San Francisco locals head to the Mission District after hours, where one can find the most entertaining fusions of food and nightlife in the city. One of the Bay Guardian Newspaper’s “Best of the Bay” winne 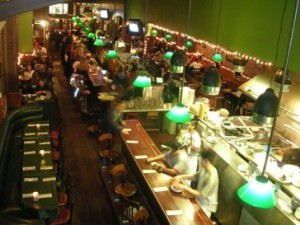 rs several years in a row,  Cha Cha Cha on Mission Street is the perfect way to pre-game your evening.  This neighborhood favorite features an extensive tapas selection, including Platanos Maduros (tropical sweet bananas with black beans and sour cream) and Ceviche Del Dia (seafood in a spicy lime vinagrette).  There are so many favorites from the tapas menu that most groups have no problem compromising on ordering one of each dish!  There is plenty to go around. One thing to be sure of when starting an evening here is ordering a pitcher of Cha Cha Cha’s famous sangria. The bartenders also make a killer Caipirinha, with Cachaca Ypioca (a Brazilian rum), sugar, and fresh lime.  Of course, if the traditional Latin drinks aren’t your thing, the bar has plenty of microbrew beers or sweet cocktails to suit you.
Next → Prev →