CityBuzz counts down the best dressed at the 2014 Metropolitan Museum of Art Gala.

Read More
+ Freshen Up Your Look for Spring

Spring has sprung and it’s time to brighten up your look for the season. From a bright smile to a fresh fragrance, style and beauty expert Lilliana Vazquez has all the tips.

One of the east coast’s most sought-after hairstylist, Johnny Lavoy, gives some simple tips on how to go from the runway to the real world without spending hours in front of the mirror.

Put a little glam into your holiday season with some new bling – and a new body!

Lauren Bush, CEO of FEED Project teams up with Clarins to feed thousands of children worldwide. See how you can help!

CityBuzz counts down the best dressed at the 2014 Metropolitan Museum of Art Gala.

For Fall Fashion 2012, the looks are structured and elegant. Donna Karan shows strong shoulders and belted waists. Coats ruled the runway. Her DKNY collection brings sophisticated jackets and skirts for the working woman. Sexy is back, with see-thru, body hugging dresses from Catherine Malandrino. And at Ralph Lauren, dapper menswear, with plaid jodhpurs, houndstooth coats and Fair Isle sweaters for day, and ultra-luxe satin gowns for evening.

The Fall 2012 collection at Ralph Lauren was dapper menswear for women and vintage glamour. Plaid jodhpurs, houndstooth coats and Fair Isle sweaters for day, and ultra-luxe satin gowns for evening.

Designer Donna Karan wants a woman to be empowered in her life and by her clothes. The Fall 2012 collection featured coats with strong shoulders and skirts and dresses with sharp pleats. Her signature bodysuit was paired with both tailored menswear looks and feminine taffeta skirts.

Read More
+ How to Look and Feel Fabulous

Former Radio City Hall Rockette, Emily Loftiss shares her tips on how to go from feeling healthy to looking fabulous throughout 2012.

What every new mom to be needs to know before the big day her bundle of joy arrives!

In today’s on-the-go world, it’s easy to get overwhelmed and lose emotional balance. Psychiatrist Dr. Janet Taylor explains how you can beat the blues in a natural way.

Sports Star Dwayne Wade checks out a sports store incognito! His mission: to spread the word about good health. Will anyone believe him?

Spring is here and it’s time to redecorate and bring the outside in. From throw pillows to candles, Home décor expert Aimee Beatty shows us how to take a warm winter theme to a bright, fun, spring theme.

Ceci Carmichael is here to tell us why there is no need to do your own baking for this holiday. She gives tips for hosting a stress free Easter.

Who doesn’t love getting a great deal? With the coupon craze in full swing, Joyce K. House shows us how a little patience can go a long way and gives some tips on how to the the maximum value on your coupon.

Whether you’re looking to throw a fancy Oscar party fit for the stars, or just having a low-key movie night with friends, Chassie Post shares her party must-haves.

What’s hot for spring in consumer electronics? Gadget Grrl is here with her top picks for the new season. From the latest smart phones, games, laptops, new apps, software and more, she’ll plug you in to the best in tech for on-the-go.

Nintendo’s Pokémon expert, Seth McMahill talks about the newest game for Wii. Featuring Pokémon species from all generations of Pokémon, there is something for all fans to enjoy!

To celebrate the launch of Super Mario 3D Land for the NIntendo 3DS, fans were invited to spend a day in a real life video game complete with a warp pipe, coin jump, and flag finale!

Hip hop legend teams up with Yoostar on MTV to talk about the videogame that makes reality tv – a virtual reality!

Before you book that flight, here are some tips to save you time and money on your next business or pleasure trip!

Where can you find a tropical paradise, great nightlife and beautiful beaches without converting currency or spending a fortune? The answer is just a short plane ride away…

Travel savvy people know the best way to see all of Europe is by high-speed rail! See for yourself. 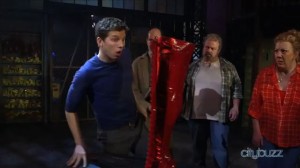 Charlie Price, played by Tony nominee Stark Sands, has suddenly inherited his father’s shoe factory, which is on the verge of bankruptcy. Trying to live up to his father’s legacy and save his family business, Charlie finds inspiration in the form of Lola, portrayed by Billy Porter. A fabulous entertainer in need of some sturdy stilettos, Lola turns out to be the one person who can help Charlie become the man he’s meant to be. As they work to turn the factory around, this unlikely pair finds that they have more in common than they ever dreamed possible and discovers that when you change your mind about someone, you can change your whole world.

Featuring a sensational new score, knockout dancing and a spectacularly uplifting story, KINKY BOOTS is the must-see new musical that proves that sometimes, the best way to fit in is to stand out!

See it at the Al Hirschfeld Theatre. Visit kinkybootsthemusical.com for more information.

Read More
+ Catch Me If You Can

It’s the musical based on the blockbuster film starring Tom Hanks and Leonardo DiCaprio. The story follows the adventures of Frank Abagnale Jr., a con artist who poses as an airplane pilot, doctor and lawyer while forging millions in checks. Now at the Neil Simon Theatre.

Read More
+ How to Succeed in Business Without Really Trying

Daniel Radcliffe of Harry Potter Fame stars in this hilarious musical comedy about a window washer who tried to work his way up the corporate ladder with the help of a book that bares the title of the play!

Ceci Carmichael is here to tell us why there is no need to do your own baking for this holiday. She gives tips for hosting a stress free Easter.

Whether you’re looking to throw a fancy Oscar party fit for the stars, or just having a low-key movie night with friends, Chassie Post shares her party must-haves.

Looking to add some variety to your holiday party without breaking the bank or buying too much? Host of “Top Chef: Just Desserts”, Gail Simmons shows how one inexpensive item can give you lots of options for holiday recipes.

Take your next holiday party to the next level wit luxurious cheese and a do-it-yourself espresso machine.

Healthy food doesn’t have to be so blah! Pack a flavor punch with these tasty ideas that are good – and good for you.

One of history’s most infamous crime couples takes center stage on broadway and getting rave reviews.

The Mountaintop takes place in 1968 and is a thrilling, eye-opening look back at events the night before the assassination of civil rights leader Dr. Martin Luther King Jr.
Following Dr. King’s most famous and memorable speech, he retreats back to his room at the Lorraine Motel in Memphis. What follows are the final moments of Dr. King’s life.

This play will have you holding your breath, just as much as Dr. King held on to hope, for a better world.

Broadways biggest players walk the red carpet and Citybuzz was there!

Read More
+ Gatorade Athlete of the Year & The ESPY Awards

Young and professional athletes come together for one of the biggest star-studded sports events of the year!