Dig if you will, a picture: hot valet drivers busy themselves parking Ferraris and Jags; inside chic, heavy doors open to a beautiful hostess who awaits your arrival with a smile; a full 360 degrees around you (and below on the lower level in its bar and terrace) are gorgeous people, 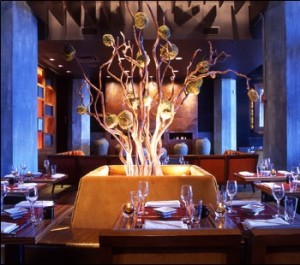 smiling, mingling and gushing over delectable sushi rolls and fusion plates. This is Japonais, Conde Nast’s pick for one of the “Top 66 Restaurants in the World.”

Having opened its doors in 2003, this place still lives in the past – only meaning that one would have assumed it opened just last month as the wait, long reservation list, and packed crowds every day of the week would elude to it being a hot new number. In 2005, Chicago Magazine named it “Best Restaurant” and soon after New York and Las Vegas claimed their own versions of the restaurant. Today, it still rocks to those beats.

From exotic cocktails (and a whole lot of sake and wine choices), signature sushi rolls and the to-die-for steaks, the menu reads part French and part Japanese, which in the culinary world, is a match made in heaven.