Where can you stand on top of $150 million dollars at 1,353 feet in the air, while overlooking four other states and swaying back and forth by six inches? Answer: The Willis Tower Skydeck . 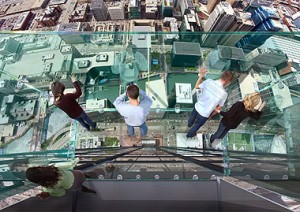 Although it has been hard for Chicagoans to embrace the change of America’s tallest building from being called the Sears Tower to the Willis Tower, the love for the new and improved observatory atop it all has been taken in with loving arms. The Skydeck’s new addition is called  The Ledge and that pretty much says it all. The Ledge consists of all glass and peters over the city of Chicago for those who dare step into its case. From there it extends 4.3 feet from the Skydeck leaving guests on top of the world.

Insider Tip: The Willis Tower, as it has always been, is a major hotspot for visitors in Chicago- and the long line reflects that. Skip the hours wait by paying 30 bucks for the express ticket and go straight to the elevators and up, up, up. Trust us, it’s money well spent.