The Forge Restaurant/Wine Bar has been the mainstay on the northern end of Miami Beach since the 1920s, known as an old-world steakhouse with matching elaborate decor. Current owner Shareef Malnik, who took ownership in 1990 from his father who owned it since 1969, has given the place a makeover, both in decor and on the menu.

It’s still elaborate and decadent but instead of the dark wood, robust interior things have been lightened up in tone, lots of whites, silvers, mismatched chairs which give the place character and a wine cellar/selection that can only be described as massive. 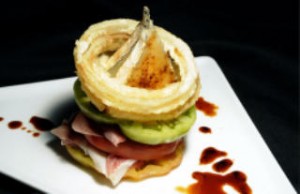 Executive Chef Dewey LoSasso, a veteran of New York and Miami restaurants, has created a menu all his own with pastas and risottos, unique appetizers like smoked salmon croquettes and quinoa pancake stacks plus main entrees like steamed local snapper in a bag and to keep with tradition an entire section of select meats.