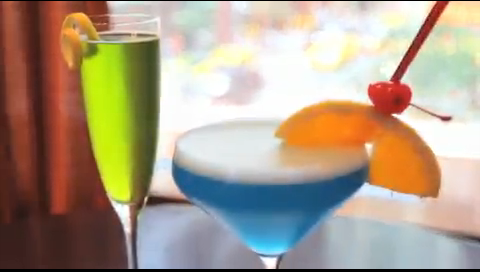 9/12/2014 NEW YORK: Sometimes, after a long day at the office, the best way to unwind is with a cocktail. Or maybe you just want to catch up with an old friend for a drink or three!

To commemorate “Once,” they’ve crafted a delicious Midori infused vodka cocktail served up in a champagne flute and garnished with a lemon wedge.

To commemorate “Blue Man Group,” they’ve crafted a – what else – blue margarita, garnished with a maraschino cherry and lemon wedge.

These cocktails are the perfect nightcap after catching a hit Broadway show. And with the convenient Times Square locations, it’s only a short walk away!

Citybuzz reaches millions of travelers a month, airing editorial programming in luxury hotels, taxis, online, and on the subway about the hippest spots. Citybuzz programming dives beyond the typical guidebook to give you a firsthand look at restaurants, shopping, sightseeing, hotels, theatre and more.

Citybuzz is the premiere destination network in the United States, broadcasting in hotel rooms, taxis, convention centers and online. Citybuzz curates the best in upscale restaurants, theatre, nightlife, shopping, entertainment, hotels and adventures in top US cities. Be part of the buzz!