Never before did Hyde Park gain such a name than in recent times, thanks to none other than the President of the United States. Reigning from Hyde Park, President Obama has heavy ties to his old neighborhood, just south of the downtown “Loop.” An eclectic mix of mansions and apartments, rib-joints and bistros, the South Side is certainly up-and-coming. But you can’t really make it until you’ve got some cool art on the scene and alas, there’s the Hyde Park Art Center, which has actually been around for 70 years. 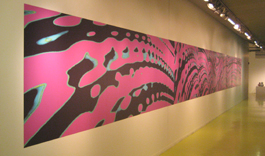 nce it opened in the 1930s (it’s actually the oldest contemporary art venue in Chicago) is to “stimulate”  and provoke the unexpected.  Today it continues to do just that with a wide range of classes, lectures, workshops, camps, exhibits, and not to mention, fun, flirty, cocktail-enriched galas.

The HPAC always stays true to its roots, however, and aims to unite artists and the community. Their Not Just Another Pretty Face bridges the gap between patrons and artists by involving them together directly. If you think you’ve got a cool idea and want to see it materialize through the eyes of a verifiable artist, then this is the program for you.