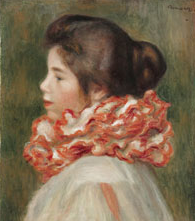 The Musée d’Orsay is collaborating with the Philadelphia Museum of Art to bring the work of painting superstar Pierre Renoir to Philly for a limited time.  While he’s best known for his works, Le Moulin de la Galette and Luncheon of the Boating Party, the consensus of the art world is that his most innovative time was near the end of his life. Pretty impressive, considering he was one of the originators of the impressionist movement.  This exhibit features these later works and the way Renoir used color in a way that influenced artists for generations to come, and the exhibit will feature several artists, such as Picasso, who were notably influenced by Renoir’s later years.