The American Idol of the blues genre takes the stage on February 6th at the Atlanta Civic Center.

Watch as well-known, extremely talented blues singers such as Floyd Taylor an 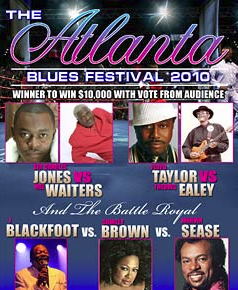 d Thodis Ealey go head-to-head to be titled the best, and this time, the audience gets to decide. Known for her 1974 classic “Woman to Woman”, Shirley Brown goes up against Marvin Sease with his lady’s man image and explicit songs, as well as J Blackfoot who scored 15 hits on Billboard’s R ‘n’ B charts between 1968 and 1978. Mel Brown – who pulls hits like “Hit It and Quit It” out of his sleeve – rises to the challenge against B.B. King Achievement Award Winner Sir Charles Jones.

There’s a $10,000 prize, and only one man will be left standing. It’s a battle of the best, so sit on the edge of your seat as artists battle it out to be the Kris Allen of blues.