The Texas Theatre in Oak Cliff is most infamously known as the place Lee Harvey Oswald was caught by police after (allegedly) shooting President John F. Kennedy. Over the years the theater has been neglected, demolition threatened, and, finally, saved by both the Oak Cliff and the film community. The Texas Theatre is now one of the only places in DFW to catch a real independent, art-house film. If obscure films, documentaries, old restored movies or just a really awful B horror movie is your cup of tea, the Texas Theatre is your kind of place. They also have bar for enjoying cocktails during the movies, as long getting up to visit the facilities in the middle of a movie doesn’t bother you.

Glowing like a beacon over the Castro District, The Castro Theatre marquee is not only a symbol of the city’s gay rights movement (as featured in the Oscar-winning film Milk), but the city’s fa 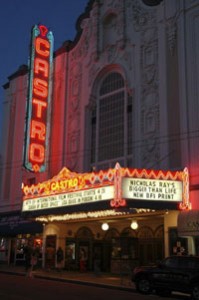 vorite venue to connect with the community in a way that is colorful and meaningful.  For decades San Franciscans have come together in this lavishly decorated historic theatre for live and screen performances, even participating in cult films such as The Rocky Horror Picture Show, Little Mermaid sing-alongs, Dionne Warwick concerts, and every single film festival that comes to town.

The Castro Theatre is old-fashioned and intimate, right down to the original brass ticket booth out front that’s big enough for only one vendor.  Inside, the Spanish-Oriental influence is apparent in the scraffito wall murals, but the gold art deco details make it familiar.  The 1,400 red velvet seats throughout the main floor, mezzanine, and balcony are new, along with the PA, sound, and lighting systems, but have stylishly retained their early-century charm.

The theatre also functions in the mainstream, as each month it features top box office movies.  Some recent favorites have been the star-studded Nine and Milk, which ran for almost two months.