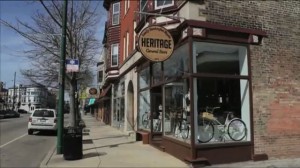 Heritage Bicycles General Store was an idea, and it would have stayed that way if owner Michael Salvatore didn’t take the leap into entrepreneurship. After spending three years helping establish Bowery Lane Bicycles (BLB) in New York City with partners Sean Naughton and Patrick Benard, Michael wanted to bring these beautiful bikes to his home town, Chicago. As a fifth-generation Chicagoan, he decided to not only bring BLB’s Breukelen and Broncks line to the Windy City, but to also add Daisy, the first offering from the Heritage line. Visit heritagebicycles.com for more information.