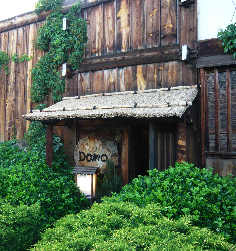 Domo hasn’t won Westword’s reader’s choice award for Best Japanese Restaurant fourteen years in a row for nothing. On the contrary, it’s a Denver treasure all the way around.

To open the heavy wooden door is to enter a rustic cottage in the feudal-era countryside, scattered with fascinating knickknacks like jars of viper wine and three-million-year-old chunks of rock salt; to exit out the other side is to discover a lush garden retreat, complete with a drum-bridged koi pond and a traditional shrine.

The menu is equally uncommon: chef-owner Gaku Homma’s so-called Japanese country fare comprises one-pot specialties such as donburi, nabemono, teriyaki, and the signature, chirashi-like Wanko sushi—all served with an array of sides and the fruity house sauce. Meanwhile, if there’s one thing Domo’s not known for, it’s efficient service—prepare to linger for a spell.