Located on Clarendon Street just across the street from the old John Hancock building, Hotel 140 offers one of the city’s best priced accommodations at under $200 a night. The boutique hotel is situated in a recently renovated historic landmark building listed on the

National Register of Historic Places in Boston’s Copley Square. The Lyric Stage is also located in this building, so you can simply step outside the hotel and check out a production.

Hotel 140 offers a variety of rooms from king bedrooms to suites with full kitchens. If you are looking to stay in the city for an extended period of time, be sure to ask about the special weekly or monthly rates and rooms. The modest and affordable accommodations offer the best value for the dollar in the city- including deals on theater productions to college visit specials- and you can’t beat the downtown location. There are numerous great places to go for drinks or dinner; the on-site Stuart Street Grill is an ideal spot for grabbing a quick breakfast before heading out to a day on the town.

You’ve seen hotel rooms with private kitchenettes, blackout shades and even a personal butler. If you think you have seen it all when it comes to living in the lap of luxury, you haven’t seen anything yet. Welcome to The Charlie Hotel. 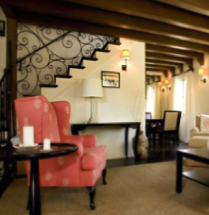 It may sound like an ordinary hotel but it is anything but. Located in West Hollywood, The Charlie is made out of 14 bungalows all named after famous faces such as Marilyn Monroe, Clark Gable and of course, Charlie Chaplin himself. The 14 bungalows all located on the street N. Sweetzer are the most luxurious and elegant bungalows, if you can even call them that, that anyone would be lucky enough to stay in. Whether you choose a two bedroom bungalow or a two bedroom apartment, each guest is meant to feel as though they are in someone’s home rather than a guest at a hotel.

Each bungalow features typical hotel services such as room cleaning and internet, but what separates The Charlie from others is its commitment to personal assistance, with amenities such as dog walking, weekly fresh flower deliveries and a gardener.

If a month or even a day at The Charlie sounds ideal, join the club. Celebrities such as Kristen Stewart and Robert Pattinson were once spotted checking in to one of the bungalows. Apparently Chaplin is trying to keep the tradition alive, from one celebrity to another.